The Smoke That Thunders

It was half past four in the afternoon and we’d just crossed the border into Zambia.  The cab of Delilah was filled with a warm evening breeze as we descended through expansive rain-forest into Mpulungu; a small fishing village nestled amidst the beautiful Lake Tanganyika.  As we arrived at the port we were greeted by the sight of the historic MV Liemba. 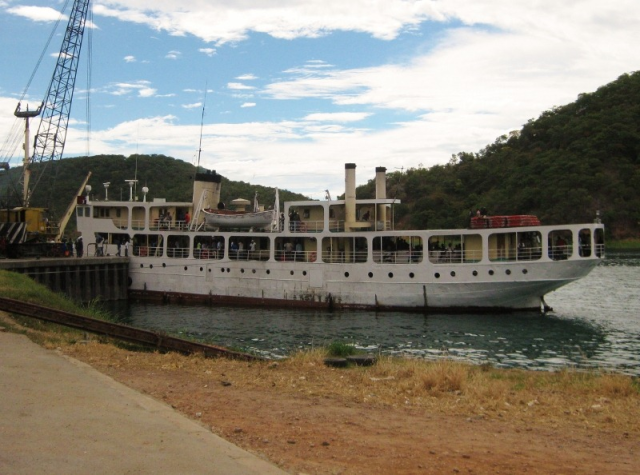 Photo courtesy of theroadrising as some of my photos have been stolen.

She is the last remaining vessel of the Kaiserliche marine, a relic of WW1 still plying her trade as a passenger/cargo vessel despite being scuttled twice.  After a quick round-up of the weekly football with the customs officials we took a quick tour to admire her fine lines and fantail stern.  A crowd of people buzzed around the vessel loading the last of an eclectic mix of cargo and saying their final farewells before she was to sail.

Back with Delilah, Richard had discovered yet another shock absorber had cracked under the stress of the road.  It was late and we still had a long drive to Lusaka so we found two rooms at a local inn: I set about doing general maintenance, Matt acquired some ice cold beers, and Richard went to find a welder for our shock absorber.  In the morning we awoke with the sun to load up and hit the road early.  It was incredibly straight disappearing over the horizon.  The road passed through several gigantic agricultural fields’ evidence of the government’s extensive farming program.  On the whole Zambia felt far more developed and relaxed compared to Tanzania.  The contrast was striking.

Further on we joined the main motorway cutting across Zambia.  Trucks loaded with massive pieces of mining equipment appeared.  It was a quiet reminder of the enormous projects underway in the copper belt of Northern Zambia.  The afternoon brought a huge thunderstorm.  Through driving rain and lightning, we arrived late that night at Fringilla Farm run by Alex a friend of Matt and Charlie.  He very generously gave us beer, steak and warm beds for the night.  We were to leave Matt and Charlie here whilst we went on to Livingstone.

Over Christmas we had seen some respite from the wet season; however the rains had returned with a vengeance throwing down a vast deluge of water.  Zambia’s parks are usually some of the best places to find illusive leopard but with most parks washed out we wouldn’t have the opportunity to find out.  In Livingstone, we had set up camp by the waterfront hotel with the express aim of finding a New Year party worthy of our expectations.  In the hotel bar we joined a motley crew of aid workers, two hilarious Zambian brothers and a big group of Capetonians who ensured the party got off to a flying start.  The drinks were flowing and by midnight everyone had been in the pool, by choice or not.

The next few days were slow, even after the haze of alcohol had cleared.  Richard was growing increasingly frustrated with the weather as the rain continued.  We moved base to Jolly boys’ backpackers; a slightly livelier location in the center of town.  Here we found ample distractions editing video, meeting fellow travelers at the bar, and readying Delilah for the next stage of the trip. 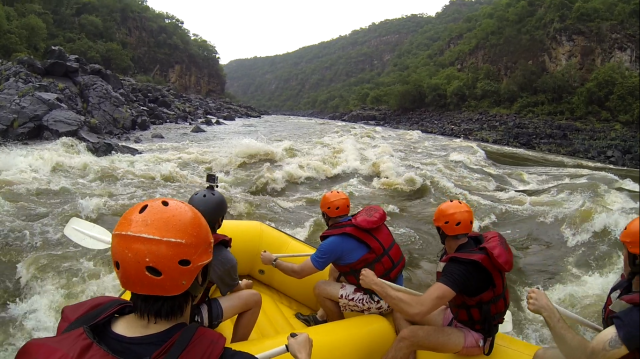 On the 4th of January the rains cleared and we threw off our shackles wasting no time in sampling all Livingstone had to offer.  If we weren’t admiring the mighty falls of Mosi-Oa-Tunya (the smoke that thunders) we were frenetically flinging ourselves off the railroad bridge, battling through the rapids of the mighty Zambezi, or eating crocodile.  We also tried the local delicacy, fried mopane worms, a dish better left to times of famine.  Despite the damp start our two weeks in Livingstone proved delightful making it hard to leave.

This entry was posted in Uncategorized. Bookmark the permalink.

2 Responses to The Smoke That Thunders