Posted on February 24, 2014 by apahartnoll
It had been a nervous night waiting the outcome of Delilah’s electronic repairs.  An early wake up call heralded the arrival of Julius.  Within thirty minutes he’d worked his magic on Delilah fixing the starter motor and the electronic short.  We didn’t understand what he’d done but normal service had been resumed.  We thanked Julius and without any demands he disappeared into the morning mist.  Astounded by this show of generosity we set off for the hour drive to Katavi national park.  On the river crossing we pulled into Camp river side to admire their cluster of hippos amassed in the meander outside the camp site.  Katavi is famed for its hippo population.  There were a few hundred hippo is the pool before us, a long way off the record of 2,500.  Still they made an impressive sight snorting and chortling to one another.  Wanting to make the most of our twenty four hour park permit we set up camp before signing in at the gate.  Our first port of call was the Katisunga Mbunga plains where there were frequent lion sightings.  On the drive down we had our first encounter with the dreaded Tsetse fly.  A viscous, stubborn insect, with a bite that can penetrate jeans.  To our dismay they were drawn to Delilah’s blue and black colour scheme.  Soon the cab was full of them.  In a futile attempt to rid ourselves of the pest we wound up the windows and hot boxed the car with deet.  Fortunately they relented and we were able to resume our search for wildlife. 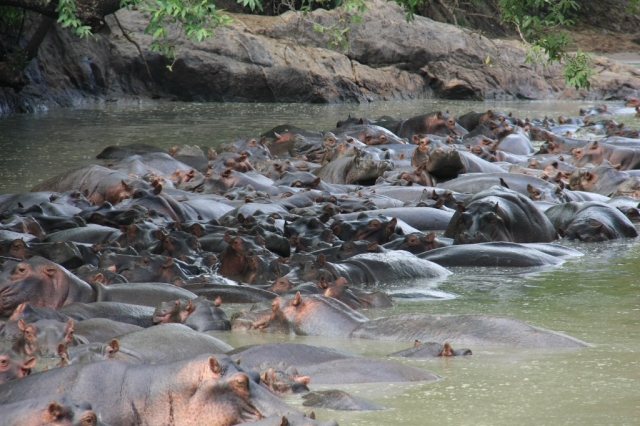 The edge of the savannah was dotted with muddy pools full of wallowing hippo.  Topi, impala, giraffe and more hippos dotted the plains.  We stopped at Katuma Tented lodge to grab a drink and ask the staff about lions and cheetah.  They suggested we head over to Lake Chada for big cats and wild dog.  The drive took us around Ikuu ranger post and the Katuma river where crocodiles, warthog and fish eagles were added to the growing list of wildlife on show. Around lake chada a line squall blew in dramatically reducing the likelihood of any big cat sightings.  The area around Lake Chada was fairly devoid of anything worthwhile so we made our way back to the Katisunga Mbunga plains before nightfall forced us out of the park.  It was an early night as we wanted to make the most of an early start the next day.  Spirits high, we slipped our moorings at 5.30 am setting our sights on Katuma lodge.  Circling the plains again we encountered a pod of hippo stampeding beside the road in between mud pools.  They were surprisingly nimble for such large animals.  Images of the hippo ballet from Fantasia came to mind.  At Katuma lodge we’d missed a pride of lions with their cubs by a matter of hours!

Disappointed with our early start we made our own decision to potter down around the airfield then across to the Eastern side of the park.  Near the Ikuu airfield large herds of buffalo roamed the grasslands, whereas along the Katuma river countless herds of giraffe filled the road, and groups of zebra flanked Delilah.  The explosion of wildlife re-ignited our enthusiasm.  Our permit expired at 11am but a chance encounter with Steve and Carolin persuaded us to buy another 24 hour pass.  Their verdict was Katavi was better than the Serengeti.  This time however we were to explore the northern reaches of the park around the Katavi plains.  Two hours were wasted chasing ghosts; as Steve and Carolin’s lion sighting had clearly moved on.  However, it brought us to the Katavi plains lined with a thick band of yellow flowers and an abundance of elephants.  The vastness of the plains alone was mesmerising, and we had it all to ourselves, no other tourists at all.  Returning to camp we were treated, quite by surprise, to some famous Arab hospitality.  Hamed, a Tanzanian Omani, and his family invited us to join their barbecue.  Frustratingly their afternoon had been full of lion sightings. Later we joined them near the river side to watch the hippos emerge from their pool for some night time grazing. 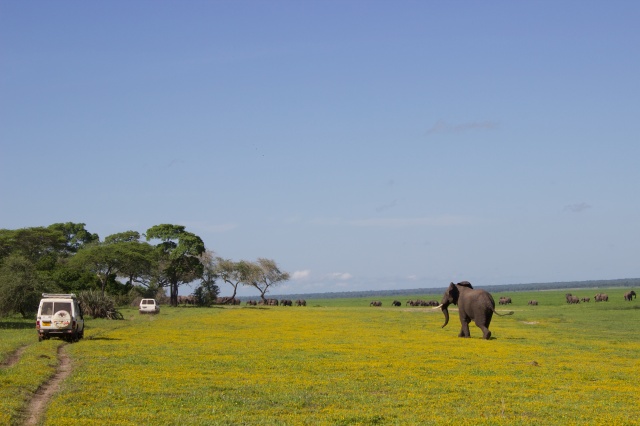 That night the tent was surrounded by the chomping and grunting of hungry hippos.  One bold hippo gave Richard a midnight fright, as he emerged from the tent he was confronted by a large black mass staring back at him.  Needless to say, he survived his encounter and the next morning we joined Hamed and his family on the road to the Katavi plains.  They’d offered to help us find some lion so we set off in hot pursuit of their two land cruisers.  The herds of elephants in the plains appeared to have multiplied, now numbering in the hundreds with more pouring out of the tree line by the minute.  The elephants of Katavi are particularly timid so they were not impressed by our small convoy trundling down the road.  Suddenly we were inundated with elephants retreating back into the tree line.  Trumpeting as they went.  Around 11 pm we parted ways with Hamed and his family as they had to return to Mpanda.  He left us insisting we visit him in Sumbawanga.  We still had a few hours left on our permit so we decided to try our luck around Lake Katavi.  The road became increasingly boggy. We had been warned the rain had made the outer reaches of the park inaccessible.  The road soon got the better of us and we were stuck for the second time this trip.  Unfazed we hoped out of the car joking this wouldn’t be a good time to see our lion.  Within 20 minutes we had freed ourselves.  Covered in pungent mud the prospect of a cool swim in the crystal clear waters of Lake Tanganiyka was too much to resist.

The drive to Kipili took three hours following a winding road down to the lake shore.  At lake shore lodge we were welcomed by Chris and Louise with cold beers.  Steve and Carolin had beaten us there and generously allowed us to share their campsite since all the camp sites were fully booked for Christmas.  We’d come here on the recommendation of our friends Jaap and Matt who had visited just a few weeks before.  A gorgeous location with sweeping views of the world’s second largest fresh water lake.  The mountains of the DRC sat mysteriously on the opposite shore.  With only a few days until Christmas we decided to stay put rather than push Delilah over 1,314 km of poor roads to Cape McClear in Malawi.  Besides this lake was as good as any.  Our decision was rewarded in full.  On Christmas eve Chris and Louise led us up to the ruins of an 18th century church overlooking the lake.  Here the local choir performed a series of Christmas carols for us and the other guests.  Thereafter a fantastic spread of food was laid on back at the lodge.  In the morning everyone awoke to stockings full of gifts from Santa who had dutifully done his rounds.  Gabriella, in particular, delighted in the sled trail on the beach.  The spirit of Christmas was alive and well at Lakeshore lodge.

That afternoon Chris appeared with a mischievous grin on his face as he handed out tasters for his latest cocktail.  Soon a group of us had joined him around the bar offering various input for the evening cocktail.  A little later an English couple, Matt and Charlie managing another nearby lodge, joined us with their flask of mald wine.  Suitably lubricated, Chris and Louise piled us into the boats for the evening surprise.  They sped us all out onto the middle of the lake where we watched the sun set behind the misty mountains of the DRC. A fantastic evening followed back at the lodge with tequila omelettes and much more merry making.  Sporting hangovers from the night before, boxing day was somewhat more subdued.  In the afternoon we joined Steve, Carolin, Gabriella and  Madeline for some outstanding snorkelling in the waters of lake Tanganyika.  The lake holds 98% of the 250 species of cichlids giving it a phenomenal array of underwater fauna.  The prospect of a Lakeshore lodge new year was very tempting but we needed to get a move on if we were to remain on schedule so the next day we departed.  On the front gate of Lake shore lodge is written: “Arrive as guests, leave as friends”, which couldn’t be truer.

With room to spare we offered Matt and Charlie a ride to Lusaka.  We had a large distance to cover that day so Richard sent a message ahead to Hamed thanking him for his hospitality but explaining we couldn’t stop for long in Sumbawanga.  As we pulled into the town for some fuel a police checkpoint stopped us.  Never a good sign.  The officer approached the window informing us: “someone wants to talk to you”.  He pointed across the road to where there stood a grinning Hamed.  In a fantastic show of generosity he’d taken time out of his friday prayers to take us for lunch at his house and show us around the town.  He even offered to give Delilah a free service at his bus depot.  The genuine kindness was so exceptionally selfless we felt guilty accepting the boxes of food he gave us when we left.  The Tanzanian-Zambian border was very quiet especially the Zambian side, which was marked by locked gate in the middle of green fields.  Perplexed by the lack of customs and immigration buildings we looked around until we spotted two lackadaisical immigration officers snoozing in the shade of a mango tree.  The customs official was on holiday so we had to drive to Mpulungu for customs clearance, which seemed a little pointless but ‘this is Africa’.  Our first taste of  Zambia.